Introducing Cascadea, the first custom style manager designed as a Safari App Extension and native macOS app. Cascadea makes it easy to install custom styles that change the look and feel of any website you want. Whether you want your social media feed to burst with color, or to give your eyes a break with a darker style, Cascadea gives you the freedom to paint the web in your colors.

Installing styles is easy – you can easily import styles from popular custom style websites, or import any CSS file from a URL or local file. Once installed, Cascadea has a clean, simple user interface for quickly toggling or deleting styles. Since Cascadea is built with a fast, fluid native UI, it’s easy to mass-toggle or mass-delete styles, drag them around to organize your style list, or export and import entire databases of styles.

Cascadea is also an incredibly powerful tool for CSS developers, whether you’re writing custom styles of your own or using it as part of your web development workflow. Cascadea includes a fully-featured code editor for writing custom stylesheets, with support for autocompletion, syntax highlighting, automatic indentation, code folding, beautification, multicursor support, and more. Choose between multiple color themes for the editor, open multiple styles in tabs, and watch Safari update live when you save changes. Plus, if you prefer your own code editor, you can easily export and import a standard CSS file into and out of Cascadea. 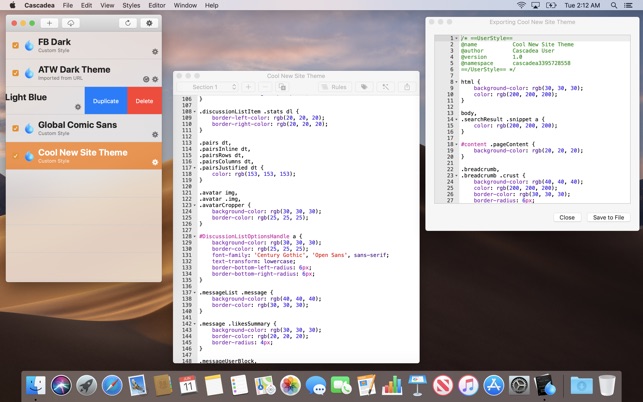